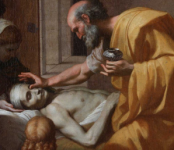 The nursing staff at the hospice was having their weekly case review meeting.  One of their client’s had asked if the hospice chaplain (me) could come for a visit.

The patient’s daughter answered the door.  “Mom’s back here; is it alright if I join you?”

The room was small.  Her mother was propped up in bed and was quite lucid.  Not really sure what it was they needed, the conversation released clues.  “The Church won’t let mom take communion because she’s been divorced.  They won’t let me either because I’ve been divorced too.”

Ahhhh.  The reason for the visit.  They were hoping that they could receive communion.  A kind of last rites.  Lacking “last rites” credentials, this was going to require an emergency run to the grocery store to patch together a little “communion kit.”  Thirty minutes later a small Lord’s Supper service was held in a crowded bedroom.

They savored the elements.  “Thank you,” they said.  It was all they needed – prayer and the Lord’s body and blood.  It reminded of what Jesus told his disciples.  “…my flesh is true food and my blood is true drink….Those who eat my flesh and drink my blood abide in me…”

The relief and gratitude on their faces was apparent in their smiles and thank yous.

Today a friend called.  “Mom is dying; would you come and pray with her?”  Her mother was very near coma.  She never roused, never appeared to know anyone was at her bedside.  But the prayer meant the world to my friend.  It too was a kind of last rites, and she even used that language.

This must be the way it felt when Mary lingered in the living room to talk to Jesus or when Jesus talked to Mary and Martha, reminiscing about Lazarus.  It would also explain why they returned to the tomb of Jesus to administer their own last rites for their Lord.

I am a church planter. I love my city and participating in its life.
View all posts by eurlog →
This entry was posted in Church Planting. Bookmark the permalink.

Ruminations from a church planter

The Blog of Philosopher Steven Colborne

Donald on Dining in and Out.

Stuff That Needs To Be Said

Thoughts on God and World